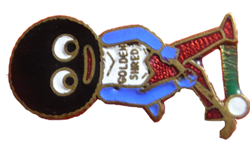 My favourite Golly badges are the prewar designs with yellow waistcoat produced by Miller. I am always looking to purchase more of these. I particularly like the Prewar Hockey player as it is a beautiful item. Made with the usual attention to detail that Miller employed with all his prewar badges, this one is particularly special in that it is the only design to include a green enamelled bar which represents the grass. It is quite difficult to find - especially in such excellent condition as the one below, but it is well worth the effort as it will significantly enhance any collection of Miller Hockey players:

Comparing it to the other hockey players produced after World War Two, the quality of design in the original Prewar Hockey Golly is clear to see. Below is an example of a White Waistcoat Golly Hockey badge made by Fattorini in the 1950's and 1960's. A much simpler design with the number of colours used is reduced from six to four:

The original green bar has been replaced by textured metal to simulate the grass, a poor substitute by comparison but one which resulted in a quicker and cheaper method of production. And so it was with considerable interest that I stumbled upon the following badge for sale in 2014. Similar to the usual white waistcoat design by Fattorini (albeit with a light blue waistcoat) but this time with the inclusion of a green enamelled area between the legs!

There has been no attempt at modification of the strengthening bar and so the green enamel is not as uniform as Miller's prewar example but it still gives us a clear idea of what someone was trying to achieve:

As you can see from the close up, the enamelling overall is rather poor so this example probably didn't pass the factory quality control, which may be why one of the workers was allowed to add green to the strengthening bar and keep for them themselves. However this is pure conjecture, and this item remains a one-off which doesn't appear in any of Colin Dodds' excellent golly reference guides, and no other example has ever come to light.