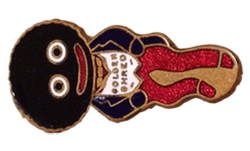 Two different shades of blue can be found on the jackets of the Golly badges from the 'white waistcoat' period - usually described as simply 'light blue' and 'dark blue' to keep things simple - but in reality it is moe of a spectrum of shades. This is because the blue colour was achieved by mixing two other colours together. So the actual shade of blue achieved, depends on the relative quantities of each base colour. As a result some bathces of badges can be found in more extreme light or dark shades. Below is an example of the extreme dark blue variation on the T in circle white waistcoat Standard:

The first two badges show the normal light and dark blue variations but the third badge is clearly a much darker blue. As badges were enamelled in batches it is highly likely that other examples exist - I would be interested to hear from anyone else with a similar example...