When badge manufacture moved away from the more expensive hot-enamelled badges to the acrylic designs in the 1980's the issue of quality control still remained. This was an issue which persisted even when a new range of badges were released in the early 1990's as this all green McGolly shows. Whilst the vast majority of mispaints, misstamps and mishaps were usually identified and discarded before they made their way to collectors quite a few items did slip through. The 1990's range of badges is no exception and one interesting mispaint is this all Green McGolly. Pictured here alongside its usual design with black or white sporran, the all Green version even has green eyes creating a rather spooky appearance: 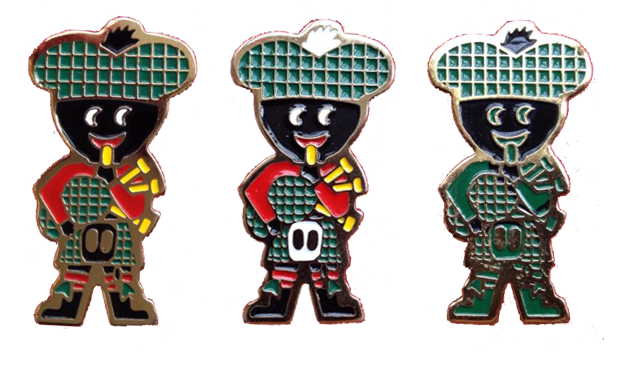 I have discovered at least two examples of the all Green McGolly over the years - although the second version does have some red in it - which implies it was not an isolated item. I have contacted the team who catalogue all Golly Badge variations but tye have confirmed it is not going to appear as an official variation in their Golly Checklist as it is unlikely to be a consistent error. There may well be more in existence, if you manage to find one please let us know and send us your pictures using the contact page.