In the early 1990's, the golly badge designs changed from the numerous colourful sporting and musical designs of the 1980's to a rather mundane selection of 21 designs. Whilst there are still some interesting items from this era - such as the astronaut whose eyes are facing the wrong way, or the policeman with blue shirt/white tie as oposed to white shirt/blue tie - in general it is not considered to be golly's finest era! But one aspect that I've been curious about for a while, involves the backstamps. In particular the direction of the backstamps on the badges. All the 1990's badges I have ever seen have the backstamps horizontally, however in one lot (purchased in 2008) I noticed that two of the badges had a vertical backstamp. Namely the Footballer and Jockey: 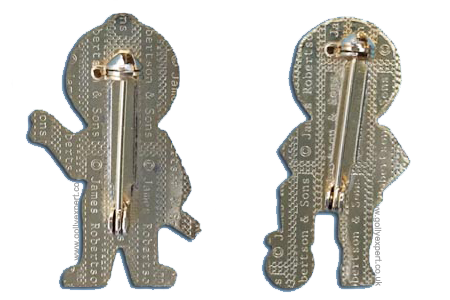 Presumably the large metal sheets from which the badges were punched out were simply placed the wrong way during production, this would imply that a batch of Footballers and Jockey's were produced like this. I am not yet sure if this anomaly occurred across all designs or just these two - but it's another aspect of golly badge collecting that makes the search a bit more interesting! It might also be the case that the backstamp is horizontal but upside down on some badges, but I haven't found a single one like this yet. For those intersted in how this might affect the value of a badge with this feature, it is unlikely that it will involve a premium over the 'normal' horizontal backstamp and is simply an area of interest to the specialist collector. For comparison, the 'normal Footballer and Jockey are shown below: 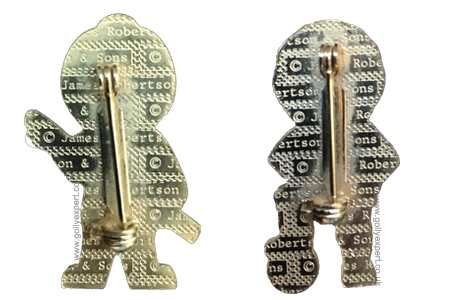 This difference has been reported to the team who produce the Golly Checklist so hopefully it will appear as an official variation in the future. If you have a collection for sale or want some more specialist information, please use the 'Contact Us' link at the top of the page to get in touch and I'll be happy to hear form you...