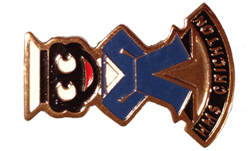 In 1983, Robertsons began an association with the minesweeper HMS Crichton which resulted in the creation of one of the most desirable of all modern acrylic Golly badges  - the HMS Crichton Sailor. This was based on the usual Sailor design (shown below).

For many years, much speculation persisted in the Golly collecting community regarding this badge, particularly in relation to the number produced. The full history of the HMS Crichton Golly has now been compiled and collectors can find a wealth of information in the latest edition of the Robertson's Golly Checklist by Colin Dodds, but a little known fact still remains. A second batch of this special badge was ordered by Robertsons which were mistakenly produced in a slightly different shade of blue resulting in two distinct versions. For the first time any where on the internet these variations are shown below.

These three badges come from the private collection of one of the world's leading enthusiasts and were taken together in a single photo to ensure identical lighting conditions. The only editing which has since been done was the removal of the background. The variation between the centre badge and the two outside ones is evident, with the centre badge being an identical shade to the usual Sailor. Owning a single example of this badge is an achievement in itself, which means for collectors who specialise in variations that this one will be very difficult to fill.