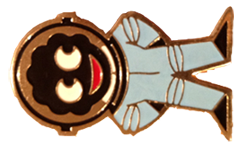 In the early 1980's, golly badge manufacturing switched from the traditional home of the Jewellery Quarter in Birmingham to South East Asia. This change was mainly due to cost, but also addressed the lack of quality control which had become a regular part of the mass produced hot enamel badges of the 1970's. A new material was being utilised and the result was a much cheaper method of production.

The 'Acrylics' as they have come to be known, came in a new range of sporting pursuits and attractive colours, and although they were again produced in their thousands there are a few notable exceptions - the blue astronaut being one of them. It's well known that the majority of Astronauts were produced in a white suit, but a blue suit was considered at one stage. A handful of prototypes were produced in a light blue and over the years some of these have found their way onto the collectors market although it is an item missing from the majority of collections. However, what is less well known is that a couple of examples of a Blue Astronaut in a distinctly deeper blue were also produced at the same time. The photo below shows the shade differences between the two blue astronauts: 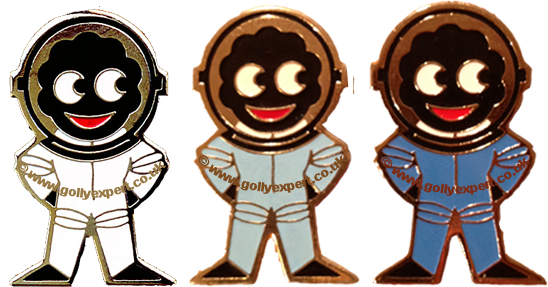 The deep blue version may well have been the original prototype as the backstamp is different from the light blue version. The deeper blue version is the rarer of the two blue astronauts.